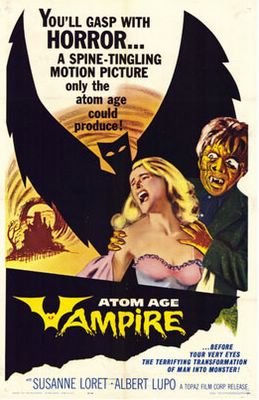 Few major postwar blues guitarists come to mind that don't owe
T-Bone Walker an unpayable debt of gratitude. B.B. King has long cited him as a primary influence, marveling at Walker's penchant for holding the body of his guitar outward while he played it. Gatemouth Brown, Pee Wee Crayton, Goree Carter, Pete Mayes, and a wealth of other prominent Texas-bred axemen came stylistically right out of Walker during the late '40s and early '50s.
Aaron Thibeault Walker was a product of the primordial Dallas blues scene. His stepfather, Marco Washington, stroked the bass fiddle with the Dallas String Band, and T-Bone followed his stepdad's example by learning the rudiments of every stringed instrument he could lay his talented hands on. One notable visitor to the band's jam sessions was the legendary Blind Lemon Jefferson. During the early '20s, Walker led the sightless guitarist from bar to bar as the older man played for tips.
Anyway, his electric guitar solos were among the first heard on modern blues recordings and set a standard that is still followed.

T-Bone Walker - I Walked Away 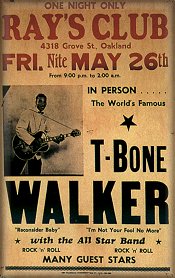 McBoozo the Clown said…
Another couple of great, great cuts!!! You never cease to amaze.
8:55 PM