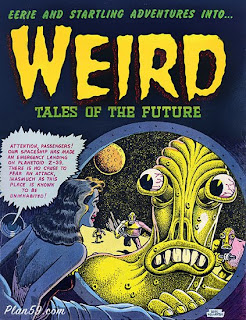 The Rock-A-Teens were a youthful sextet from Richmond, Virginia, led by Vic Mizelle (vocals, guitar). The other members were Bobby "Boo" Walke (guitar), Bill Cook (guitar), Eddie Robinson (sax), Paul Dixon (bass) and Bill Smith (drums). They first opened for business during 1956 as high school band Boo Walke & the Rockets.
In 1959 they auditioned for George Donald McGraw, who owned a record shop in Salem, Virginia, and a record label, Mart Records, to which Mickey Hawks was contracted at the time. McGraw was impressed by the boys' own composition "Rock-A-Teen Boogie", a falsetto-refrained instrumental with one of rock's first midtune drum solos. Retitled "Woo-Hoo", it came out on Doran 3515 (a subsidiary of Mart) in August 1959.

These first pressings on Doran credited the Rock-A-Teens as the writers of "Woo Hoo". However, none other than Arthur "Guitar Boogie" Smith sued the group for plagiarism, much to the confusion of the young boys. McGraw then said "I'll buy the song off you guys and that way they can't sue you". For a few hundred dollars, the song got a new owner. Unbeknownst to the group, McGraw struck a deal with Morris Levy at Roulette Records in New York to reissue the record for national distribution on Roulette 4192, now with composer credits on both sides going to G.D. McGraw.

Anyway, that was the frantic story of probably one the most frantic song ever recorded.

But fellows, you know me, as a strong defender of culture, here’s the complete lyrics of Woo-hoo, wich, in my humble opinion, should be teached in school.

There you go, brought to you by the one and only, Rev. Frost. 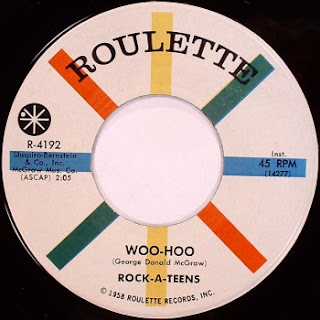 My band, The dumm robinsons have a website up now, and a dodgy CD. Check it out at

Anonymous said…
splendid and always smart!! that's a hell of a blog to read and listen! thanks Rev!
4:42 PM

erik hogstrom said…
Awesome stuff Rev. Thanks for showing that "Whoo Hoo" has a history that extends beyond the 5.6.7.8.s
2:51 AM

Anonymous said…
Mcgraw stole the song from the group, as the Rock-A-Teens name was on the Doran lable, and Mcgraw made a deal with Roulette Records,knowing the song had a gimmick, and realizing it was going to be a hit, stole the copyright, and put his name on the record.
3:06 AM

Anonymous said…
The Rock-A-Teens version still holds up today as a classic!
Fifty years later, and they are still remembered!
True pioneers for the punk rock genre in the late 70's!
12:54 AM

Eclipsante said…
Although I am posting this VERY late, I just wanted to say thank you. My father, Eddie Robinson, was the saxophone player for The Rock-A-Teens. It's nice to see that some people out there still appreciate their contribution to the music world.
8:26 AM

Reverend Frost said…
Brilliant, thank you !
The sax parts on the Lp are absolutely great !!!
12:44 PM

A lil’ bit of soul brothers and sisters? Another singer that mythical Allen Toussaint did productions for. “Natural Soul Brother” was recorded at the end of the 60s and released on the Minit label. Danny White’s record failed to hit the charts (at the same time other act produced by Toussaint, The Meters, released their album) and so Danny grew disenchanted with the music business and this was his last ever recording. Damn ! Danny White - Natural Soul Brother Danny White - Cracked Up Over You
Read more